‘”White saviourism” under scrutiny after child deaths in Uganda’, the Irish Times, June 29, 2019

‘How misinformation is making it almost impossible to contain the Ebola outbreak in DRC’, TIME, June 20, 2019

‘Inside the battle to save Congo from the Ebola crisis’, TIME, June 19, 2019 (recommended in Foreign Policy’s ‘Morning Brief’) 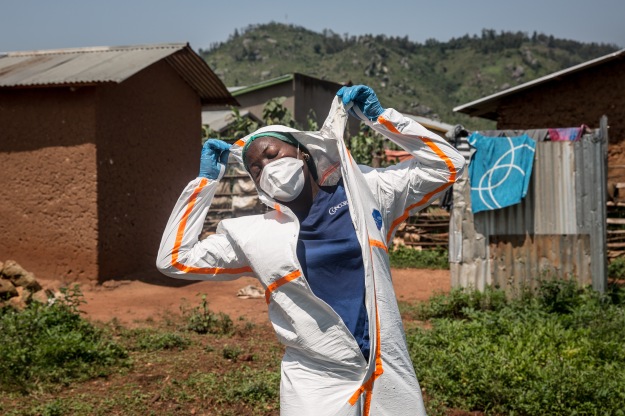 Belinda Landu, 28, takes off her protective gear after decontaminating the house of a pastor who’s just tested positive for Ebola

Helped with this report on migrant detention in Libya for ITV News, June 11, 2019

Helped with this report on the conditions in Zintan detention centre for Channel 4 News, June 7, 2019

Speaking at the Mobile Journalism Festival in Galway about refugees in Libyan detention centres using phones to send information.

‘Call for prosecution of EU over migrant deaths in the Mediterranean’, the Irish Times, June 5, 2019

An article about the background to our 2017 investigation into refugees being arrested/tortured after going back to Syria is the cover story in this quarter’s Investigative Reporters and Editors Journal. Available to members here.

Ranked 16th most influential journalist on Twitter in Ireland.

‘Germany follows UK in suspending refugee aid to Uganda’, the Irish Times, May 29, 2019

‘War-torn Libya’s evacuees fret about those left behind’, the Irish Times, May 21, 2019

‘Poverty, corruption and fake news to the fore as Malawi gears up for elections’, the Irish Times, May 17, 2019

‘Sudan civilian protests to continue after talks with military council collapse’, the Irish Times, May 16, 2019

‘Ebola outbreak in eastern DR Congo out of control, say aid workers’, the Irish Times, May 15, 2019

‘Migrants in line of fire as battle to take Tripoli rages on’, the Irish Times, May 8, 2019

‘Fortress Europe: what happens to the refugees sent back to Libya?’, Today in Focus podcast, the Guardian, May 8, 2019 (Wednesday briefing)

‘As Tripoli conflict continues, detained migrants run out of food’, Al Jazeera, May 2, 2019 (also in Bosnian)